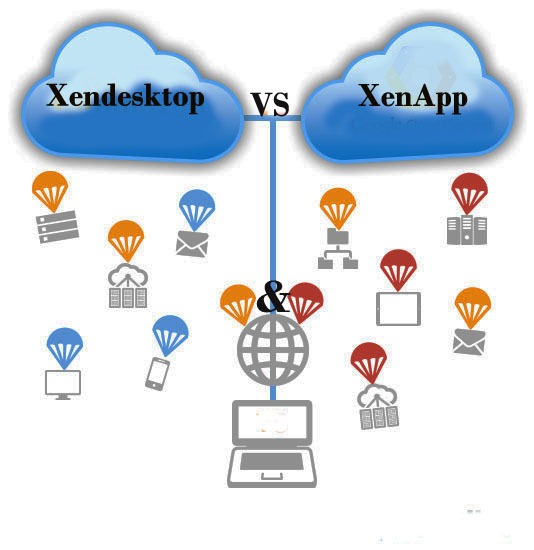 As you know, Citrix brings two cloud-hosted Citrix VDI resources to users…Citrix Virtual Desktop aka XenDesktop and virtual applications or Citrix XenApp. Both are formidable products sharing lots of similarities; yet each has its unique features. This blog will help you understand each one of these so that you get a clear understanding of which product would you need, why and when.

Let’s get the products- understanding first.

What is Citrix XenDesktop VDI?

What is Citrix XenApp?

It’s an application virtualization software that allows multiple users access resources from a shared server or a Cloud system (App cloud) from anywhere in the world, using any device.

Note here, though XenApp is an application publishing platform essentially, but you can also publish desktop with XenApp.

It’s a general belief that if you want to access virtual applications (apps), you need XenApp (XA) and for accessing hosted desktops, you use only XenDesktop (XD).

It’s true that the XenApp has applications as fundamental focus, whereas XenDesktop focuses on hosted desktops.

But the point to note is, both of them can give access to hosted apps and desktop though in a slightly different way.

Here are the differences…

Execution environment brings a major difference. XenDesktop will allow you to access hosted resources as a single user on a Windows client machine (e.g. Windows 7,8) when you have the entire infrastructure in place. That is, one user can run multiple apps at the same time. Hosting service provider companies (like Apps4Rent) providing XenDesktop furnish Windows server OS.

XenApp gives access to multiple users (from 5 to 200, because it shares resources) on a Windows Server machine (e.g.Windows Server 2008R2 or 2012). Here multi-users share resources (like CPU, GPU, memory, disk) of one machine at the same time.

Vis-à-vis XenDesktop users get their exclusive/private resources. A single user can use multiple applications at the same time.

Instance on a shared platform    Uses a VDI machine

Put simply, XenApp is a shared solution, XenDesktop is a virtual desktop solution both working through the same web interface.

XD suits best for large organizations that have dispersed and resource-intensive users. Such businesses usually deploy hundreds of virtual machines justifying the Xendesktop cost. Examples could be government, finance, insurance sectors to name a few.

Small to medium-sized businesses that are not resource-intensive, typically use XA wherein they can get easy virtualizations without large expenses. Usually, they have 3-4 servers and able to improvise productivity and performance both along with enhanced security at much-reduced costs.